… is the title of a book, published earlier this year, reflecting on UNESCO’s 2015 International Year of Light. It is certainly worth a look – especially if you missed the range of activities throughout last year – and have a serious interest in how light affects us all.

“Inspired by Light: Reflections from the International Year of Light 2015, is a collection of 56 blog posts from researchers, industry professionals, students, NGO representatives, a Nobel laureate, and other authors from 24 countries that were published on the IYL 2015 blog. This book, to be published in January 2016 for distribution at the IYL 2015 Closing Ceremony, was produced by SPIE in concert with the European Physical Society and the International Centre for Theoretical Physics (ICTP) to celebrate the achievements of IYL 2015. Contributions in the book cover, light in culture, education, science, and technology with essays that pay homage to the people throughout history who have advanced light-based technologies, and to the many ways humanity has been influenced and inspired by light.”

The book can be downloaded via the IYL2015 link here:
Inspired by Light: Reflections from the International Year of Light 2015 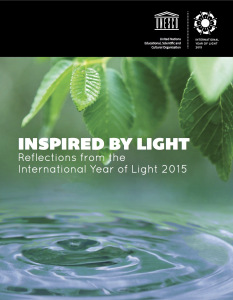 And you can check out the light2015blog as well.